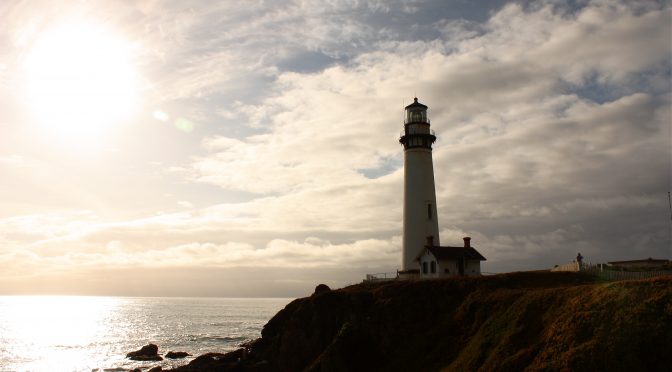 First, to dispense with an irritation. The guy who said Virginia Woolf’s To the Lighthouse is ‘not about anything very interesting or important’[1] … well, he was wrong.

To the Lighthouse is about love, and subjection, and forgiveness. Art. Parenthood. Death. It conjures up—if you’ll excuse my earnestness—the joy and dread of being alive. So yeah, the subject matter’s interesting and important.

Briefly, the background: Published in 1927. Set in the Ramsay family’s holiday house in the Hebrides. The main characters: Mrs Ramsay, Mr Ramsay, their eight children (among them 6-year-old James), and a cast of visitors, including Lily Briscoe (an artist) and Charles Tansley (an acolyte of Mr Ramsay’s).

The story opens with James hoping to take a trip to the lighthouse. His mother says he can go, if the weather is fine. His father says it will rain. So, why read the rest of it?

You know how we all move through the world, peering out from inside our own heads? Paying partial attention, sometimes being helpful, sometimes total crap?

Well, this book captures that. And it does it so well that you care whether Mrs Ramsay is cold without her shawl; feel James’s rage at his father’s interruptions; want Lily to finish painting her scene, whether it ends up in the attic or not.

Watching Woolf’s characters interact is a joy. For example: Mrs Ramsay tells Charles that a mutual friend should have been a great philosopher, but made an ‘unfortunate marriage’. Having enjoyed Mrs Ramsay’s hint at ‘the greatness of man’s intellect … the subjection of all wives’, Charles wishes they were in a cab, so he could pay; or at least, that she’d let him carry her bag. He imagines achieving great things while she watches on. And later, having revealed a vulnerability (he’s never been to the circus, he’s poor), he’s overflowing with pride to be walking with her, because she’s so beautiful. She lets him hold her bag.

So we see that Charles is a dull man who views Mrs Ramsay as a mirror for his ego—and that he’s lonely, needy, a bit sad. We also see how Mrs Ramsay indulges Charles, defers to the ‘masculine’ intellect, and maintains her own view of him (‘he was an awful prig—an unsufferable bore’).

Reading this scene is like being at a party, and instead of watching an interaction and thinking, something here is a bit off, being able to see it with painful, half-smiling clarity.

Woolf was a modernist who tried to find new ways to write, and understand the world. She looked away from ‘plot, comedy, tragedy, love interest and catastrophe in the accepted style’, towards what she called the ‘semi-transparent envelope’ of existence.[2] She meant, I think, that life isn’t a neatly arranged series of events, full of the kind of tension we expect in a tightly plotted novel; it’s continuous, often confusing, confining, terrifying, and wonderful.

So when major plot points occur in To the Lighthouse, they’re presented in brackets—as an aside. I love this, because events happen as they do in life: as interruptions to our illusion of safety, things beyond our individual control. It also denies us the spectacle of a ‘bomb’ going off, which was a risky move on Woolf’s part. Readers want to inhabit that moment of catastrophe, right? But sometimes big events can become a barrier to empathy: when there’s a gun in a character’s face, aren’t we thinking at least as much about ourselves, as the story? What would I do in this scary situation? Isn’t that shocking? Or sad, or whatever. We’ve lost the fine grain of the character’s situation. We’re reading it like a news headline.

This is a beautiful book. Woolf brings the landscape alive; creates natural tension between the house and the far-off lighthouse; slowly dims the light in the dining room until the windows become a darkening mirror. In the dinner scene (which anchors the story), Woolf shows us Mrs Ramsay’s artistry in bringing people together, creating ‘such moments … [when] the thing is made that endures.’ There’s a lovely parallel here between what Mrs Ramsay creates—a home, a family life—and Lily Briscoe’s painting. Both are artists. But Woolf stays sharp: during dinner Mr Ramsay is vain as well as generous, and once dinner is over the beneficent Mrs Ramsay is cranky to find her younger children still awake.

4: To say boo to her critics

Woolf absolutely had opinions about other people’s work, but man, some of the critiques of her books are snarky. F.R. Leavis thought To the Lighthouse was Woolf’s ‘only good novel’, and he seemed to think it was okay mainly because it appeared to be based on her life (patronising much?).[3] And as for Arnold Kettle, the guy who said the book’s not about anything important: he also wondered in what sense one of the final scenes was a culmination a key relationship, which had me wondering whether he had read the book all the way through.

Perhaps I’m being unfair. Maybe Leavis and Kettle just didn’t like the book (which is fine, of course). And there’s a stack of other criticism that I haven’t even touched. So maybe this fourth reason isn’t just about thumbing one’s nose at these guys (though if you chose to do that, I couldn’t stop you), but thinking about the relationship between a book and the wider world. The writer’s job, Woolf said, was ‘to get in touch with the reader by putting before him something which he recognises … and makes him willing to co-operate’ with the world of the story.[4] What seems insightful to me—the everyday ways a man could depend on a woman’s lower status to feel better about himself—probably chafed in 1927 (and may still, in some quarters, today). And things we don’t (or won’t) recognise are easily dismissed as unimportant, right? But of course that doesn’t mean that they are.

So, when I think about what’s recognisable, and what’s strange (and wonderful, and sad) in To the Lighthouse, I also think about what’s recognisable and strange in the world today. Woolf gives me hope that if we look closely—imperfectly, perhaps, subject to our own odd perspectives, prejudices, fears—we might see a little bit of the way things are, and how they might be. And it seems to me that right now, that’s just what we need.